With a vividly graphic design, this poster makes no qualms about protesting the Vietnam War. As turbulent sentiments arose from the American public concerning the purpose and justice of the Vietnam War, countless posters were created in political protest. 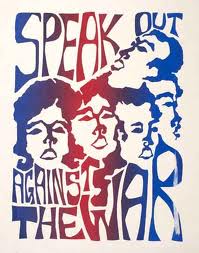 SPEAK OUT - This protest poster makes no qualms about objecting to American actions during the Vietnam War.

Interestingly, when the Vietnam War started, only a small percentage of the American population opposed it. Objections to the war came from people with left-wing political opinions who hoped for an National Liberation Front (NFL), or Viet Cong victory; pacifists who opposed all wars; and liberals who believed that the best way of stopping the spread of communism was by encouraging democratic governments rather than employing force.

The first march to Washington against the war took place in December, 1964. Only 25,000 people took part but it was still the largest anti-war demonstration in American history.

As the war continued, more and more Americans turned against it. People were particularly upset by the use of chemical weapons such as napalm and agent orange. In 1967, a group of distinguished academics under the leadership of Bertrand Russell set up the International War Crimes Tribunal. After interviewing many witnesses, they came to the conclusion that the United States was guilty of using weapons against the Vietnamese that were prohibited by international law. The United States armed forces were also found guilty of torturing captured prisoners and innocent civilians. U.S. behavior in Vietnam was even denounced as being comparable to Nazi atrocities committed in World War II.

The decision to introduce conscription for the war increased the level of protest, especially among young men. Students in particular began protesting at what they considered was an attack on people’s right to decide for themselves whether they wanted to fight for their country.

In 1965, David Miller publicly burnt his draft card and was sentenced to two and a half years in prison. His actions inspired others and throughout America, Anti-Vietnam War groups organized meetings where large groups of young men burnt their draft cards.

Protest reached a peak point later in 1965 when the U.S. began its heavy bombing of North Vietnam. Anti-war marches, especially those organized by the Students for a Democratic Society (SDS), attracted an ever-widening base of support, culminating in 1968 after the successful Tet Offensive by the North Vietnamese proved that the war’s end was still a long time coming.

Between 1963 and 1973, 9,118 men were prosecuted for refusing to be drafted into the army. The most famous of these (an interesting tidbit in my opinion) was Muhammad Ali, the world heavyweight boxing champion.

This poster, with its clearly agitated subjects calling out yells of dissent, perfectly captures the protest, instability, unrest, and tumult felt in America during this time period.