George Orwell would be proud. There are still people yearning after 1984.

In his futuristic book, 1984, written in the 1940’s following World War II, Orwell predicted a world overrun by probing governments and intrusive surveillance technology by the year 1984. Twenty-eight years following the passing of his magic year, there are still those hopefuls waiting for his prophecy to come to fruition.

Like whoever painted this lovely piece: “Feliz 1984” accompanied by a pair of binoculars. Talk about irony. For anyone who has read 1984, it’s not a happy picture. For starters, the novel is categorized as a dystopian novel (not to be confused with utopian) about a society in a state of perpetual warfare in which the people undergo incessant public surveillance and unrelenting mind control. In this society heavily influenced by technology and overwhelming propaganda, individuality and reason are crushed in favor of unwavering obedience to government, industry, and country. 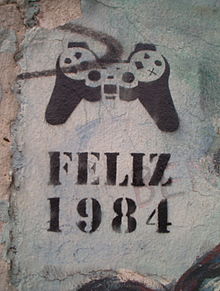 BACK IN THE GOOD OLE DAYS - This artist advocates for a society similar to the one in George Orwell's dystopian novel, 1984.

Big Brother, the cult personality of The Party regime in this otherworldly society, instills fear in citizens with the slogan “BIG BROTHER IS WATCHING YOU.” Hence the addition of binoculars to this piece of art. Perhaps the most depressing element of Orwell’s society, however, is the complete lack of citizen awareness. The government blatantly manipulates, and the people blindly follow—unknowingly entrenching themselves deeper into a web of brainwash. And those select few who do suspect foul play are either too frightened to act or suffer the consequences of speaking up.

In short, 1984 is anything but “feliz.” Nothing could be less happy, or farther from reality today.