Few things have caused a greater schism in American society than the Vietnam War.

The 1960’s encompassed a time of political, racial, social, and cultural unrest as the U.S. became polarized between those who advocated continued involvement in Vietnam and those who wanted peace. Central to the conflict was the fact that many did not understand the origins of the Vietnam War or the reasons behind the U.S. decision to intervene. To a majority of Americans, the war seemed futile and pointless, and it left the nation questioning the policies of a government it had always trusted.

The movement against U.S. involvement in the Vietnam War began with demonstrations in 1964 and grew in strength over the next few years, peaking in 1968. Many in the peace movement were students, mothers, or anti-establishment hippies, but there was also involvement from educators, labor unions, clergy, journalists, lawyers, military veterans, and ordinary Americans. Expressions of opposition ranged from peaceful nonviolent demonstrations to radical displays of violence.

In terms of peaceful nonviolent demonstrations, a large number took place independently on college campuses, while national demonstrations took the form of Marches on Washington, which drew hundreds of thousands of people and continued up until the war’s end in 1975.

Out of these demonstrations arose countless posters and political signs harboring anti-war messages and slogans. Some are direct and simple, a call for something; others, with sharp and severe messages, prompt a double-take; some are sad, while others mock through ironic jokes and a biting sort of sarcasm; still others are vulgar and obscene, placing blame as they look for a scapegoat and search for someone to blame.

Here are some particularly poignant rally signs and posters from various anti-war demonstrations:

CALL FOR ACTION - A fairly generic rallying sign calling for the end of the war and the return of U.S. soldiers. 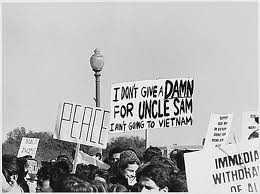 DESPICABLE DRAFT - The poster reads "I don't give a damn for Uncle Sam" and protests the draft. Uncle Sam was a familiar character on recruitment posters. 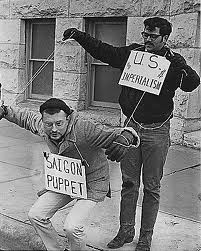 MASTER PUPPETEER - This photo shows two protesters, one labeled "Saigon Puppet" and the other "U.S. Imperialism."

A SIGN TO LAST THE AGES - A rallying sign featuring one of the most familiar and famous messages of the 1960's: make love, not war. 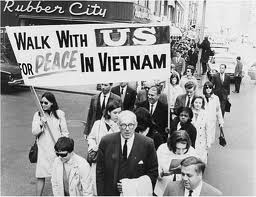 COME WITH ME - A sign calling for those opposed to the war to participate in a protest march.

A NEW HITLER? - One of the more darkly labeled rallying signs, this poster compares President Nixon to Hitler, substituting a swastika for the 'x' in Nixon's name. 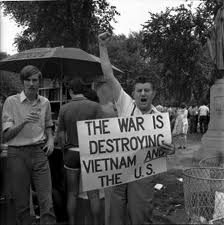 DOUBLE JEOPARDY - This poster suggests that the war's effects are not only taking a toll in the U.S.

PROTEST POSTERS - A group of protesters walk with rallying signs reading: "Bring the Troops Home Now," "War No More," "End the War in Vietnam Now," and "Self Determination for Vietnam."

LEADING THE WAY - This rallying banner leads a group of marchers protesting the Vietnam War.

Watch this video for a deeper look at Vietnam War protests.