I’ve been in Nicosia, Cyprus for less than five days now, and I can’t help but notice the political graffiti scene. It’s colorful, intense, and everywhere. Nicosia, as the last remaining divided capital in the world, is no newcomer to the outcries and protest.

Nicosia is divided into Old and New cities. In the New city, graffiti tends to be more abstract and less politically divisive. Entering the Venetian walls of the Old city, however, graffiti gives way from flare to blatant political statements.

Since 1974 when Turkey invaded and conquered the northern half, the island of Cyprus has been a divided country, composed of the Republic of Cyprus in the south and the Turkish Republic of Northern Cyprus in the north. Cyprus has been a member of the EU since 2004, although neither the EU or UN recognize the Turkish Republic as an independent state. Turkey alone recognizes the Turkish Republic, while the rest of the world considers it an illegally occupied territory in violation of international law. Not only is the island divided, but the capital as well. Through the middle of Nicosia runs the “Green Line,” called the “Demarcation Line” by some, and this divides Turkish northern Nicosia from Cypriot southern Nicosia. Seven crossing points are guarded on each side by respective Greek and Turkish soldiers, while there exists a UN buffer zone in between, stretching as little as two meters at points and sometimes reaching up to six kilometers.

Southern Cypriots, almost entirely Greeks, view the division as the utmost offense and when speaking on the issue, are still very emotional and passionate. More than 200,000 Greek Cypriots were forced to flee their northern homes when Turkey invaded in the 1970’s and they still consider themselves refugees in southern Cyprus. Unable to return to their homes until 2002 when border crossings were first opened, they were shocked and traumatized to find their prior places of residence altered completely, demolished, and inhabited by Turkish families. Land that Greek Cypriots owned in the north was given freely to Turkish Cypriots and mainland Turks and to this day, no Greek Cypriot has received payment for their properties or been allowed to return home.

Given the situation, although not violent, it is only natural that a certain amount of vehemence and resentment course through the city, often showing itself in art form. Graffiti becomes particularly abundant in areas nearest the Green Line, where key spots render the most visibility for artists. 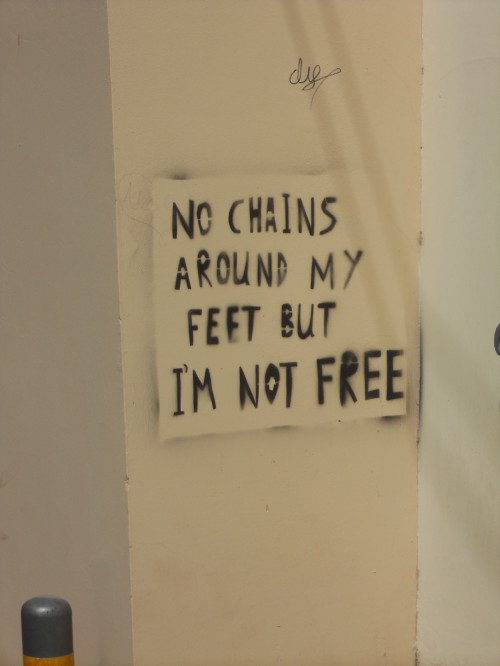 FAUX FREEDOM – On a wall on the Greek side near the Green Line in Nicosia, Cyprus, one artist perfectly expresses the feelings of many southern Cypriots.

Numerous corners and walls near the Green Line have quickly scrawled expressions such as “Fuck Turkey,” “Free Cyprus,” and “No Borders,” such as the sign below.

Calls for peace are also seen, such as the following image on a street corner.

The following pictures are from the Giris border crossing, one of the seven crossings along the Green Line. A sign declares Nicosia “the last divided capital in the world,” while a mosaic advocating peace was cleverly placed by one anonymous artist just to the side of the border crossing, which almost no passerby can miss.

One last thing: as a symbol of their conquest, the Turks in the northern half of Cyprus erected an enormous flag symbolizing their Republic. It’s similar to Turkey’s flag with reversed colors. While Turkey’s flag is red with a white moon crescent, this copied version is white with a red moon crescent. During the day it’s not as visible, but at night it lights up, and you can see its spiteful face looming over most parts of Nicosia from the Turkish mountainside. It’s the most outwardly obvious piece of political art in Cyprus.