In search of material for a post today, I came across the interesting tidbit that banknotes have historically been commonly used mediums on which to pass propaganda to the public.

In almost all propaganda battles whether political or revolutionary, leaflets in the form of banknotes were produced by both sides.

It makes sense, really. In the form of posters, page-sized flyers, or brochures, propaganda leaflets may be easily avoided by patriotic or frightened citizens of a target country. But why should anyone be wary of a banknote? It’s the perfect way to distribute insidious propaganda messages to unsuspecting passerby.

The Americans, British, Germans and Russians all used this technique in WWII. Half a decade later in the Korean War the United States once again prepared banknote leaflets. Although usually prepared by civilian organizations, these notes were almost certainly sponsored by a higher intelligence agency or branch of the government. The habit of using banknotes as propaganda leaflets especially increased during the Cold War, a time when there was no actual combat by arms. With a relatively low level risk for escalation, both sides were able to attack the philosophy and beliefs of the other without fear of retaliation by force. Propaganda is, after all, a mental game rather than a physical one.

Commonly called, “Political Banknotes,” there are hundreds of these types of notes across multiple countries (with messages in as many languages, of course). For the purpose of keeping things simple, I’ve found an American “Political Banknote” attacking former president Richard Nixon.

ONE FOR THE MONEY - Former president Richard Nixon was once targeted on a banknote issued as public propaganda. Responsible for the 'Inflated States of America,' he is blamed for the country's economic downturn.

In caricature form, Nixon resides in the center of a “frozen” two-dollar bill, making a peace sign with one hand and crossing his fingers with the other—probably in the hopes of escaping the Inflated States of America and returning to whatever State existed before “Phase Two Cash” was necessary.

According to its creator, James Montgomery Flagg, the portrait went on to become “the most famous poster in the world.”

The portrait to which he referred is of an elderly man with white hair and a goatee wearing a top hat with white stars on a blue band, and red and white striped trousers. None other than “Uncle Sam” himself.

Originally printed in the magazine Leslie’s Weeklyunder the title “What Are You Doing for Preparedness?” the poster was renamed to “I Want You” when it began its career as a recruitment image. Over four million copies were printed between 1917 and 1918, and the image was also used extensively during World War II to encourage men to join the ranks. 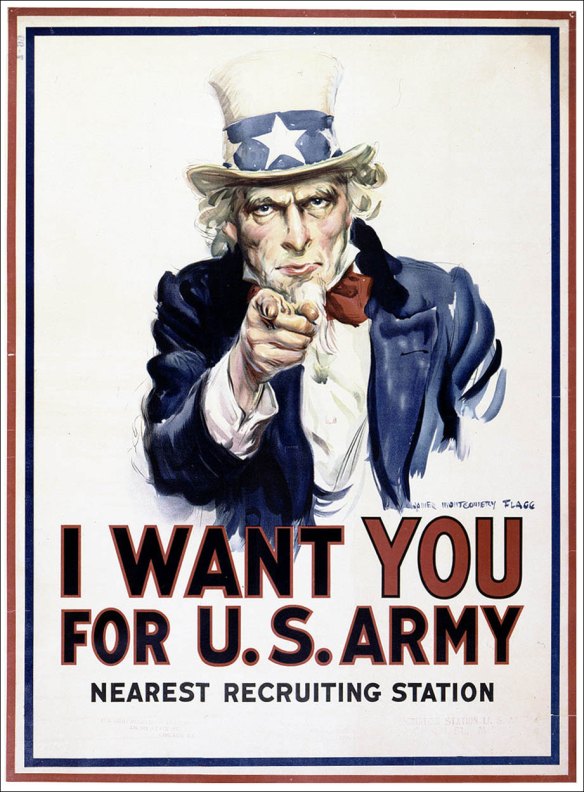 AMERICA'S MAN - Uncle Sam is as much an American symbol as the bald eagle or the stars and stripes. He first appeared in World War I army recruitment posters.

Perhaps one of the most iconic American images, “Uncle Sam” bears resemblance to Flagg as well as to Samuel Wilson, who purportedly inspired the character.

As the story goes… during World War I, Sam Wilson was a meat packer living and working in Troy, New York. Each barrel of meat rations was stamped “US” before it was shipped to American soldiers. The soldiers of that time equated their United States supplied rations with Uncle Sam Wilson. The story grew to mythological proportions, resulting in a somewhat fictional image of Sam Wilson emerging as the white bearded, red-white-and-blue clad symbol of America.

THE MAN BEHIND THE IMAGE - The real Sam Wilson, a meat packer in Troy, New York during World War I, who reportedly inspired the character Uncle Sam.

The 87th Congress of the United States adopted the following resolution on September 15, 1961:

“Resolved by the Senate and House of Representatives that the Congress salutes Uncle Sam Wilson of Troy, New York, as the progenitor of America’s National symbol of Uncle Sam.”

In terms of defining America, Uncle Sam is right up there with the bald eagle and the stars and stripes.

A U.S. flag going up in flames and officials oppressing innocent citizens – this poster clearly reflects the American fear of communism and terror at the potential infiltration of its ‘red’ believers. 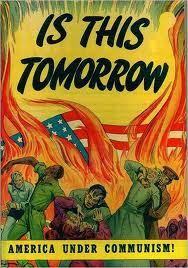 Two periods in U.S. history are characterized by Red Scares: the first in the early 1920’s following the Bolshevik Revolution in Russia in 1917 and the second following World War II, from 1947-1957. The second is of course tied to Joseph McCarthy, the notorious Republican Senator who accused a number of prominent and influential American citizens of secretly being a part of the Communist Party.

The American fear of communism as a political ideology is a long-standing one, and thus has produced some powerful examples of psychological propaganda. Following the Bolshevik Revolution, America was subject to mounting anxiety that a similar revolution would occur on the home front, spurred by workers angst and fiery beliefs of radical anarchism. These testy times provoked aggressive police investigation of accused persons, unwarranted jailings in many instances, and even deportation of peoples suspected of being associated with either communist or radically left-wing political ideologies.

The second Red Scare, arising after World War II, was popularly known as “McCarthyism” after its most famous supporter and namesake, Senator Joseph McCarthy, who claimed he had names of suspected communists which included A-list individuals like movie stars, writers, and government officials.

Posters like this one only exacerbated the problem by surrounding citizens with images that portrayed a communist uprising or takeover as impending, when in actuality, such a development was entirely improbable. The intention was that people see red everywhere they looked; that way, when a friend or neighbor was accused, it didn’t seem so unlikely.

Classic propaganda, that—seeing what isn’t real, and believing what is seen.

During World War II, American propaganda was used to increase support for the war and to ensure a commitment to an Allied victory. Posters were commissioned by branches of the U.S. Government such as the armed forces, recruiting bureaus, the Office of War Information, and the United States Treasury. Patriotic in nature, these prints stirred up pro-American feelings and helped mobilize citizens to support the war movement.

Within the realm of political art, I’m most fascinated by the persuasive power of propaganda posters. With just a simple design and a short (and sometimes not-so-sweet) slogan, prints gave off a powerful message, called people to action, and produced a lasting effect on the home front.

I’ve posted a video in tribute.

Watch this YouTube video for a look at some of the most iconic propaganda posters used in World War II.

Clearly, this is not a prime example of a father. On the contrary, he appears to be the family disappointment.

I’ve seen this image before in history books, and I’d always assumed it was an American piece of propaganda. It is in fact British. 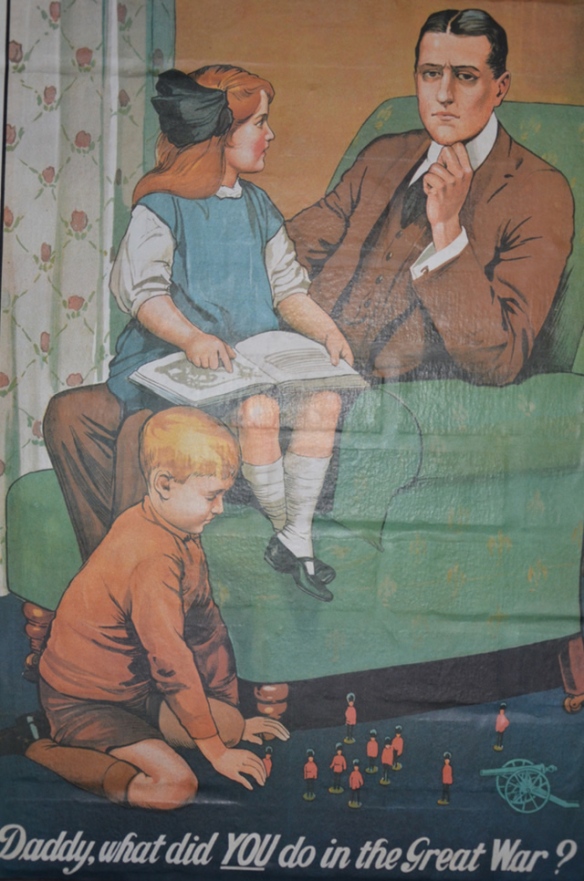 This 1915 British propaganda poster by Savile Lumley was based on a real-life father who worried what his children would later think of him if he didn’t contribute to the war effort by enlisting.

Designed in 1915 by the print artist Savile Lumley and mass produced by the British Parliamentary Recruitment Committee, it was intended to encourage men to enlist. Before conscription became law in 1916, the British government relied primarily on propaganda like this to up recruitment numbers.

One can imagine the scene. Presumably the girl has just learned about the Great War in school. Intrigued by the stories her teacher tells and the pictures she sees in her schoolbook, she innocently inquires, “Daddy, what did YOU do in the Great War?” in the way that children do, having no prior reason to believe that her father ISN’T in fact the great hero of World War I.

I think the poster captures the awkward moment between her question and his answer—the moment he realizes he has nothing to say.

It certainly inspires a sense of patriotic guilt and tugs at the emotions. No dad wants to be THAT dad.

Interestingly enough, though, the poster turns out to be based on a real-life THAT dad. The idea for the poster was actually that of a printer, Arthur Gunn, who reportedly imagined himself as the father in question. His son, Paul, later revealed the poster’s beginnings:

“One night my father came home very worried about the war situation and discussed with my mother whether he should volunteer. He happened to come in to where I was asleep and quite casually said to my mother, If I don’t join the forces whatever will I say to Paul if he turns round to me and says, What did you do in the Great War, Daddy? He suddenly turned round to my mother and said that would make a marvelous slogan for a recruiting poster. He shot off to see one of his pet artists, Savile Lumley, had a sketch drawn straight away, based on the theme projected about five years hence, although by the time it had taken shape the questioner had become one of my sisters.”  –Paul Gunn

Gunn soon after joined the Westminster Volunteers to ensure he wouldn’t remain THAT dad.

“Rosie the Riveter” looks the ideal woman as she proudly pronounces “We Can Do It!” to fellow females in this 1942 World War II propaganda image.  A fictional product of the U.S. government, “Rosie the Riveter” was commissioned for creation to encourage women to join the work force and aid in the war effort.

Following the Japanese bombing of Pearl

Norman Rockwell is also credited with creating a popular “Rosie the Riveter” image used to encourage women to aid the war effort. Rockwell’s “Rosie” appeared on the cover of The Saturday Evening Post.

Harbor in December 1941 and the full-blown involvement of the U.S. in World War II, women were called upon to join a work force which had been severely depleted by the military draft. Because the idea of women working was unseemly and controversial, the U.S. government saw the value in launching extensive campaigns to persuade women to join the work force.

Pittsburgh artist J. Howard Miller was hired by the War Production Coordinating Committee to create a number of posters for the war effort, and “Rosie the Riveter” was his product. Miller based his “We Can Do It!” poster on a photograph taken of Michigan factory worker Geraldine Doyle.

Following Miller’s creation, other “Rosie’s” were conjured by artists of the day, most notably Norman Rockwell, whose own “Rosie” appeared on the May 29, 1943 edition of The Saturday Evening Post.

“Rosie” has come to symbolize the millions of real women who worked in America’s factories, plants, and shipyards during WWII and remains one of the most recognizable propaganda characters.

“Rosie’s” character found its way into other art forms such as music. Listen to the 1942 song, “Rosie the Riveter” by The Four Vagabonds.